A solar power inverter, or PV inverter, or Solar converter, converts the variable direct current (DC) output of a photo voltaic (PV) solar panel into a utility frequency alternating current (AC) that can be fed into a commercial electrical grid or used by a local, off-grid electrical network. It is a critical BOS–component in a photo voltaic system, allowing the use of ordinary AC-powered equipment. Solar inverters have special functions adapted for use with photo voltaic arrays, including maximum power point tracking and anti-is-landing protection 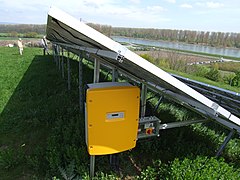 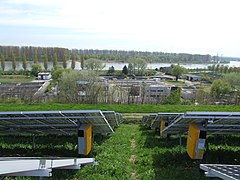 A typical power inverter device or circuit requires a relatively stable DC power source capable of supplying enough current for the intended power demands of the system. The input voltage depends on the design and purpose of the inverter. Examples include:

24 and 48 VDC, which are common standards for home energy systems.

200 to 400 VDC, when power is from photovoltaic solar panels.

300 to 450 VDC, when power is from electric vehicle battery packs in vehicle-to-grid systems.

Hundreds of thousands of volts, where the inverter is part of a high voltage direct current power transmission system.

There are two basic designs for producing household plug-in voltage from a lower-voltage DC source, the first of which uses a switching boost converter to produce a higher-voltage DC and then converts to AC. The second method converts DC to AC at battery level and uses a line-frequency transformer to create the output voltage

This is one of the simplest waveforms an inverter design can produce and is useful for some applications.

Where power inverter devices substitute for standard line power, a sine wave output is desirable because many electrical products are engineered to work best with a sine wave AC power source. The standard electric utility power attempts to provide a power source that is a good approximation of a sine wave.

Sine wave inverters with more than three steps in the wave output are more complex and have significantly higher cost than a modified sine wave, with only three steps, or square wave (one step) types of the same power handling. Switch-mode power supply (SMPS) devices, such as personal computers or DVD players, function on quality modified sine wave power. AC motors directly operated on non-sinusoidal power may produce extra heat, may have different speed-torque characteristics, or may produce more audible noise than when running on sinusoidal power.

A "modified sine wave" inverter has a non-square waveform that is a useful rough approximation of a sine wave for power translation purposes.

The waveform in commercially available modified-sine-wave inverters is a square wave with a pause before the polarity reversal, which only needs to cycle back and forth through a three-position switch that outputs forward, off, and reverse output at the pre-determined frequency.[3] Switching states are developed for positive, negative and zero voltages as per the patterns given in the switching Table 2. The peak voltage to RMS voltage do not maintain the same relationship as for a sine wave. The DC bus voltage may be actively regulated or the "on" and "off" times can be modified to maintain the same RMS value output up to the DC bus voltage to compensate for DC bus voltage variation.

The ratio of on to off time can be adjusted to vary the RMS voltage while maintaining a constant frequency with a technique called PWM. The generated gate pulses are given to each switch in accordance with the developed pattern and thus the output is obtained. Harmonic spectrum in the output depends on the width of the pulses and the modulation frequency. When operating induction motors, voltage harmonics are not of great concern; however, harmonic distortion in the current waveform introduces additional heating and can produce pulsating torques.[4]

Numerous electric equipment will operate quite well on modified sine wave power inverter devices, especially any load that is resistive in nature such as a traditional incandescent light bulb.

Most of the AC motors will run on MSW inverters with an efficiency reduction of about 20% due to the harmonic content. However, they may be quite noisy. A series LC filter tuned to the fundamental frequency may help

By definition there is no restriction on the type of AC waveform an inverter might produce that would find use in a specific or special application.

The AC output frequency of a power inverter device is usually the same as standard power line frequency, 50 or 60 hertz

If the output of the device or circuit is to be further conditioned (for example stepped up) then the frequency may be much higher for good transformer efficiency.

The AC output voltage of a power inverter is often regulated to be the same as the grid line voltage, typically 120 or 240 VAC, even when there are changes in the load that the inverter is driving. This allows the inverter to power numerous devices designed for standard line power.

A power inverter will often have an overall power rating expressed in watts or kilowatts. This describes the power that will be available to the device the inverter is driving and, indirectly, the power that will be needed from the DC source. Smaller popular consumer and commercial devices designed to mimic line power typically range from 150 to 3000 watts.

Not all inverter applications are solely or primarily concerned with power delivery; in some cases the frequency and or waveform properties are used by the follow-on circuit or device.

When attempting to add more batteries to an inverter, there are two basic options for installation: Series Configuration and Parallel Configuration.

If the goal is to increase capacity and prolong the runtime of the inverter, batteries can be connected in parallel. This increases the overall Ampere-hour(Ah) rating of the battery set.

If a single battery is discharged though, the other batteries will then discharge through it. This can lead to rapid discharge of the entire pack, or even an over-current and possible fire. To avoid this, large paralleled batteries may be connected via diodes or intelligent monitoring with automatic switching to isolate an under-voltage battery from the others.

Inverter designed to provide 115 VAC from the 12 VDC source provided in an automobile. The unit shown provides up to 1.2 amperes of alternating current, or enough to power two sixty watt light bulbs.

An inverter converts the DC electricity from sources such as batteries or fuel cells to AC electricity. The electricity can be at any required voltage; in particular it can operate AC equipment designed for mains operation, or rectified to produce DC at any desired voltage.

Inverter circuits designed to produce a variable output voltage range are often used within motor speed controllers. The DC power for the inverter section can be derived from a normal AC wall outlet or some other source. Control and feedback circuitry is used to adjust the final output of the inverter section which will ultimately determine the speed of the motor operating under its mechanical load. Motor speed control needs are numerous and include things like: industrial motor driven equipment, electric vehicles, rail transport systems, and power tools. (See related: variable-frequency drive ) Switching states are developed for positive, negative and zero voltages as per the patterns given in the switching Table 1.The generated gate pulses are given to each switch in accordance with the developed pattern and thus the output is obtained.

Grid-tied inverters are designed to feed into the electric power distribution system. They transfer synchronously with the line and have as little harmonic content as possible. They also need a means of detecting the presence of utility power for safety reasons, so as not to continue to dangerously feed power to the grid during a power outage.

Internal view of a solar inverter. Note the many large capacitors (blue cylinders), used to store energy briefly and improve the output waveform.

A solar inverter is a balance of system (BOS) component of a photovoltaic system and can be used for both, grid-connected and off-grid systems. Solar inverters have special functions adapted for use with photovoltaic arrays, including maximum power point tracking and anti-islanding protection. Solar micro-inverters differ from conventional converters, as an individual micro-converter is attached to each solar panel. This can improve the overall efficiency of the system. The output from several microinverters is then combined and often fed to the electrical grid.

Inverters convert low frequency main AC power to higher frequency for use in induction heating. To do this, AC power is first rectified to provide DC power. The inverter then changes the DC power to high frequency AC power. Due to the reduction in the number of DC sources employed, the structure becomes more reliable and the output voltage has higher resolution due to an increase in the number of steps so that the reference sinusoidal voltage can be better achieved. This configuration has recently become very popular in AC power supply and adjustable speed drive applications. This new inverter can avoid extra clamping diodes or voltage balancing capacitors.

There are three kinds of level shifted modulation techniques, namely:

With HVDC power transmission, AC power is rectified and high voltage DC power is transmitted to another location. At the receiving location, an inverter in a static inverter plant converts the power back to AC. The inverter must be synchronized with grid frequency and phase and minimize harmonic generation.

The High voltage DC transmission method can be useful for things like Solar power since solar power is natively DC as it is.

Electroshock weapons and tasers have a DC/AC inverter to generate several tens of thousands of V AC out of a small 9 V DC battery. First the 9 V DC is converted to 400–2000 V AC with a compact high frequency transformer, which is then rectified and temporarily stored in a high voltage capacitor until a pre-set threshold voltage is reached. When the threshold (set by way of an airgap or TRIAC) is reached, the capacitor dumps its entire load into a pulse transformer which then steps it up to its final output voltage of 20–60 kV. A variant of the principle is also used in electronic flash and bug zappers, though they rely on a capacitor-based voltage multiplier to achieve their high voltage.

Typical applications for power inverters include:

Portable consumer devices that allow the user to connect a battery, or set of batteries, to the device to produce AC power to run various electrical items such as lights, televisions, kitchen appliances, and power tools.

Use in power generation systems such as electric utility companies or solar generating systems to convert DC power to AC power.

Use within any larger electronic system where an engineering need exists for deriving an AC source from a DC source.